Skip to content
Home/Bioethics, BIOETHICS NEWS, NEWS and VIEWS/One of the smallest newborn in the world – 22 cm. Seven months later he leaves the hospital in good health. Bioethical approach

One of the smallest newborn in the world – 22 cm. Seven months later he leaves the hospital in good health. Bioethical approach

The smallest baby in the world to survive has been discharged from hospital after having reached 3238 grams in weight. The baby was born in a clinic in the Japanese city of Keio last August weighing 268 grams. 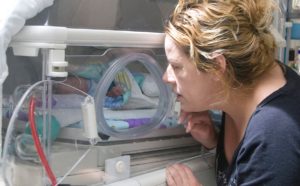 When Ryusuke was born on October 1, 2018, he measured 22 centimetres (8.66 inches) tall, and the medical staff kept him in a neonatal intensive care unit after 24 weeks and five days of pregnancy a diagnosis had shown he had stopped growing within his mother’s womb because his mother Toshiko experienced hypertension. They used tubes to feed him, sometimes taking cotton swabs to apply his mother’s milk to his mouth. Nearly seven months later, the boy has grown 13 times in weight, now weighing over three kilogrammes. He will be released from Nagano Children’s Hospital in central Japan over the weekend.

The record for the most premature baby boy to survive until now was born in Germany in 2009 and weighed 274 grams. The tiniest baby girl was also born in Germany, in 2015, and weighed 252 grams. The physician in charge of the case, Dr Takahashi Arimitsu, says that this case shows that “there is a possibility that these children will be able to leave the hospital in good health even though they are born small”. Really, the fundamental success of this case is that the child did not suffer any negative medical sequelae on discharge (MSN, April 4 19 2019).

Before, for a baby born at 22 or 23 weeks, an individual doctor could say that it is not worthwhile to do anything

Since the early days of neonatal medicine, controversy has existed about when to provide intensive care for infants born at the earliest survivable gestational ages. Today, medical advances appear to end the controversy.

A recent article published in Medical Express affirms,  Survival rates of extremely preterm infants have improved by leaps and bounds since the 1980s, with US and Swedish studies published this week providing new data on the trend.

Doctors previously estimated the earliest gestational age a baby could be considered viable outside the womb was 28 weeks, when they weigh around 2.2 pounds (one kilogram)—about 12 weeks short of the 40-week length of a normal pregnancy. Babies are considered premature under the 37-week mark.

But over the last nearly 40 years, that 28-week limit has steadily dropped, and now some babies delivered at 24, 23 or even 22 weeks (measured from their mothers’ last menstruation) are able to survive, even as they weigh 1.1 pounds or less.

The author also says that Sweden holds the world record for earliest neonatal viability: 77 percent of babies born between 22 and 26 weeks in 2014 to 2016 survived one year, up from a 70 percent about 10 years before, according to a study published Tuesday in the Journal of the American Medical Association (JAMA).

In those 10 years: immediate intubation at birth, administration of drugs and a quick transfer to a neonatal intensive care unit (NICU).

Nearly 90 percent of deliveries in Sweden now occur in one of six hospitals in the country that have top-level NICUs.

“Before, for a baby born at 22 or 23 weeks, an individual doctor could say that it is not worthwhile to do anything,” said Mikael Norman, coauthor of the Swedish study and a neonatologist at Karolinska University Hospital in Stockholm.

From a bioethical point of view, the Sweden procedures for neonatal advanced life support success show an urgent necessity to follow this strategy by neonatal intensive care units.

The new possibilities for survival in extremely preterm infants—who are surviving in ever-increasing proportions, are more premature at birth and have fewer sequelae—make it necessary to review the protocols for medical care in babies born at 24 weeks of gestation or earlier, who are neglected today in many cases. Furthermore, the limits established in some legislations for the practice of abortions under certain circumstances, which have been defined by the gestation time that marks the limit of their chances of survival after a preterm birth, should also be reviewed. The advances in neonatal intensive care in extremely preterm infants merely expose the arbitrary nature of imposing time limits in which certain abortions may or may not be performed or that in some way modify the personal status of the fetus, its dignity and its rights