American scientists have published an article in the journal PNAS in which they describe a method for designing completely biological machines from scratch, based on the computer processing of multiple designs and selection of the best by combining living cells, in this case, frog cells (See HERE).

The work, which falls within the prominent field of Synthetic Biology, suggests different applications—still distant—in both medicine and bioremediation. The study authors point out that the great advantage of these machines is that they are completely biodegradable. 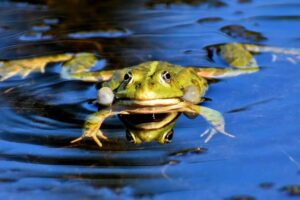 Named xenobots after the African clawed frog (Xenopus laevis) from which the stem cells are taken, the machines are small enough to travel inside human bodies. They can walk and swim, survive for weeks without food and work together in groups. These are “entirely new life-forms,” said the University of Vermont, which conducted the research with Tufts University.

The possible moral value of a biobot

However, it is becoming urgent to answer some questions arising in this field, even if they seem like science fiction. Thus, Josh Bongard of the University of Vermont says “It seems that these biobots are the third class of animated matter: they are not robots nor are they strictly organisms. I think these biobots will force biologists and philosophers to rethink our definitions of life and what a machine is. In the future, should computer-designed organisms have the same rights as people and naturally evolved animals?”.

In our view, the moral value of an organism – in this case – biobots biological machines – does not depend on its origin, but on what it is. By way of example, the value of human life is independent of whether it has been conceived naturally, by in vitro fertilization or by cloning. Likewise, the human design involved in the genesis of an organism is irrelevant in terms of its moral value. Nevertheless, we do find that there may be difficulty in determining whether these new entities constitute an organism or a machine. In the work discussed here, the biobots do not meet one of the pillars traditionally recognized in the definition of living things: the ability to reproduce. However, researchers do not rule out that in the future they may endow biobots with this feature, which may even be desirable for some applications.