Skip to content
Home/Bioethics, BRIEF NEWS, Genetics and Genomics/A step to investigate the secrets of life in creatures that perished 70 million years ago

Looking for differences and similarities between our current life on earth and  70 million years ago.

“The tiny fossil is unassuming. It is not as big as an Apatosaurus femur or as impressive as a Tyrannosaurus jaw. The object is just a scant shard of cartilage from the skull of a baby hadrosaur called Hypacrosaurus 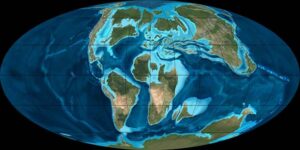 that perished more than 70 million years ago. But it may contain something never before seen from the depths of the Mesozoic era: degraded remnants of dinosaur DNA. In a study published earlier this year, Chinese Academy of Sciences paleontologist Alida Bailleul and her colleagues proposed that in that fossil, they had found not only evidence of original proteins and cartilage-creating cells but a chemical signature consistent with DNA. Recovering genetic material of such antiquity would be a major development. Working on more recently extinct creatures—such as mammoths and giant ground sloths—paleontologists have been able to revise family trees, explore the interrelatedness of species and even gain some insights into biological features such as variations in coloration. TDNA from nonavian dinosaurs would add a wealth of new information about the biology of the ‘terrible lizards.’ Such a find would also establish the possibility that genetic material can remain detectable not just for one million years, but for tens of millions.”

The issue calls our attention because “it would contain scraps of the genetic record that ties together all life on Earth.”.