A short review of the US vaccination politics

A priori, and without exerting too much cognitive effort, one might reasonably think that vaccination in the United States (US) is voluntary.

The relevance of the principle of autonomy

The argument would be simple: in view of the importance given to the principle of autonomy in the US, above all by circumscribing it to Bioethics, added to the utilitarianism and liberalism that has seeped into the public consciousness (consciously or unconsciously), the conclusion that should be reached is that vaccination is a right. Accordingly, in the exercise of personal liberty and autonomy, it can be voluntarily accepted or rejected according to the interest of each citizen.

Moreover, if there was a conflict of rights, based on the bioethical foundation just argued, coupled with the 14th Amendment, the right to privacy and intimacy would prevail over and above the right to health.

However, we said “a priori” because, paradoxically, such a conclusion is not accurate as regards vaccination, nor has it historically been so.

In fact, the Spanish Bioethics Committee (2016, p. 6) says that “In this regard, the case of the United States is paradigmatic, because, from a somewhat permissive formula based on education and information, it is now moving towards a system of mandatory vaccination”.

The origin of such an obligation stems from jurisprudence. Thus, according to Galán (2018, p. 901), “In US jurisprudence, as early as 1905, the Federal Supreme Court ruled in the Jacobson v. Massachusetts case on the possibility of restricting a person’s freedom in order to coercively impose a medical remedy, serving the public interest that must prevail”. The social context had to do with the smallpox vaccine, where a citizen refused vaccination on the grounds of the ethical and legal principles outlined above. Nonetheless, Judge Harlan concluded that, in this case, the interest of the community should be protected above the individual interest. 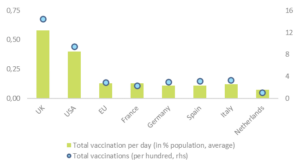 What has happened since then is that the evolution of this obligation, which stemmed from the rights we mentioned earlier, is being limited for some cases, not for all citizens.

In other words, vaccine administration in the US is a duty in certain cases (schoolchildren), in which some States (few) admit exceptions.

Rodríguez de Brujón (2020) corroborates this, saying that “in comparative health law, in cases of epidemics and serious risk to public health, vaccination is mandatory; in the United States specifically, being vaccinated is a prerequisite to be able to access certain levels of education, as is the case in California”.

The College of Physicians of Philadelphia (2018) specifies that “Today in the United States, all states require that children be vaccinated for certain diseases before school entry (the required immunizations vary by state). A variety of exemptions are allowed, depending on state and local regulations. Mississippi and West Virginia offer only medical exemptions to vaccination. In other states, medical, religious, and often philosophical/personal belief exemptions are available”.

However, the obligation could be extended to other groups, such as health workers, but Biden’s health policy is succeeding both in its communication strategy and in vaccine administration, so for now, and as far as our information goes, it has not implemented mandatory vaccination. It must also be borne in mind that the number of cases of infection was becoming very substantial.

The legal status of vaccination in the United States is as follows:

Vaccine administration began as a duty rather than a right since the common good prevailed over the individual interest.

However, the evolution of this duty, stemming from the rights to privacy, autonomy and intimacy in the legal conscience of citizens, has resulted in circumscribing it to certain groups.

These groups are, above all, schoolchildren, although some States (few) allow exceptions.

Finally, the successful vaccination rate, due to the Biden administration’s health policy, has resulted in the fact that, as we know, mandatory vaccination has not been implemented.