We congratulate Maxwell’s demon on his 150th birthday and wish him long life!

Maxwell’s demon has fascinated the scientific world throughout its entire existence. In its 150 years of life, new facets have been discovered that have caused astonishment and controversy among philosophers and scientists alike. Let’s take a look at why. 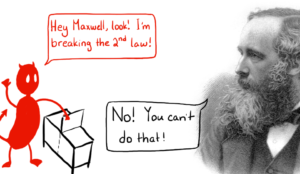 The second principle of thermodynamics

Our everyday experience tells us that things become more disorderly and chaotic over time. This observation corresponds to the second principle of thermodynamics, which says that the total amount of disorder – or entropy – in the universe will always increase over time.

However, there are also other formulations of this second principle. For our purposes, the following version of Clausius may be more suitable: “It is impossible for a self-acting machine, unaided by any external agency, to convey heat from one body to another at a higher temperature”.

In 1871, in his book Theory of Heat, James Clerk Maxwell presented to the public the idea of “a being whose faculties are so sharpened that he can follow each molecule in its course”. This figure would soon be called “Maxwell’s demon”, and it has tormented physicists for decades. The adjective “demon” was attributed to it by William Thomson, later Lord Kelvin, who chose the name not to imply any kind of foul play, but rather to emphasize the role of the intelligence of the being.

In a thought experiment, Maxwell imagined dividing a gas-filled room into two chambers, erecting a wall with a small door. Like all gases, it is made up of individual particles that are in motion. Some go faster (warmer) and mix with the slower (cooler) particles to give an average temperature.

It took more than a hundred years to solve the paradox

A paradox is an argument that begins with apparently acceptable assumptions and is driven by supposedly valid deductions until it reaches an apparent contradiction. Since logic does not allow for contradictions, either the apparently acceptable assumptions are not acceptable, or the supposedly valid deductions are not valid, or the apparent contradiction is not a contradiction. A paradox is useful because it can show that something is wrong even when everything seems fine. It doesn’t show what is wrong, but something is wrong, something we thought we understood. The paradox prompts us to re-examine the argument until we discover what is wrong; for this reason, many paradoxes have led to interesting discoveries, to the point that physicist John Wheeler went so far as to say, “No progress without a paradox!”.

This is the case with the thought experiment of Maxwell and his demon, but on this occasion, even though scientists were constantly focused on it, the solution was elusive.

The first major step was taken in 1929 when Hungarian physicist Leo Szilard had the ingenious idea of treating the demon’s intelligence as information and linking it with physics. He reasoned that the thought experiment does not actually violate the laws of physics because the demon must exert some energy in determining whether the molecules are hot or cold. As a simplification, he proposed his own paradox using a Maxwell demon in a mechanism that uses a single gas molecule. It did not resolve the contradiction because although it considered the memory of the demon as an important element in the analysis of his one-molecule engine, Szilard did not reveal the specific role of memory in terms of the second law.

The correct answer, the real reason why Maxwell’s demon cannot violate the second law, arrived in 1961 as an unexpected result of a very different line of research: research on the energy requirements of computers in which Rolf Landauer, at IBM, introduced the principle of “logical irreversibility” demonstrating that any manipulation of logically irreversible information, such as the erasure of information from a memory, results in a minimal amount of work converted to the heat released into the environment. Subsequently, his partner at IBM, Charles H. Bennett, based on this principle, argued in 1982 that the real reason why Maxwell’s demon could not violate the second law was that, to observe a molecule, he must first forget the results of the previous observation, dissipating energy.

Now, the thought experiment is replicated in reality

In the second half of the 20th century, numerous simulation exercises of this type of experiment were carried out, and now in the 21st century, the continuous progress of nanotechnology has provided the means to experimentally verify these relationships, giving rise to a renewed interest in carrying out the actions of our demon.

In 2010, Japanese scientists were the first to convert information into free energy in an experiment that verifies the Maxwell demon thought experiment. University of Tokyo physicist Masaki Sano and his colleagues published a paper in Nature Physics, in which they described how they got a Brownian particle to travel upwards on a “spiral-staircase-like” potential energy created by an electric field, solely on the basis of information about its location.

In 2016, researchers were able to bring Maxwell’s thought experiment to reality, exchanging matter for light, applying the idea of the demon to two compartments containing not gas, but light. The experimental realization was carried out by scientists from Oxford University, who used a photonic circuit to show that measurements made on two light beams can be used to create an energy imbalance between them, and this imbalance can be used to extract work.

The didactic value of Maxwell’s proposal explains the constant reference to the demon that has been made by numerous scientists throughout its century and a half of existence. One example is the recent article by Galina Weinstein, Demons in Black Hole Thermodynamics: Bekenstein and Hawking, in which Bekenstein repeatedly cites Maxwell’s Demon; or the more than 500 articles and books of scientific importance on the subject listed by Leff and Rex more than 15 years ago.

Information thermodynamics, which has recently become an experimental science, has the potential to offer new insights into physics, chemistry, and biology. It might even extend to the realm of quantum mechanics, where it could pave the way for the complete thermodynamics of quantum information.

We, therefore, congratulate Maxwell’s demon on his 150th birthday and wish him a long life.