However, Lancaster and her colleagues were not the first to produce a brain mini-structure in a bioartificial culture. Indeed, in 2008, Japanese researchers reported that they had obtained spherical structures that simulated the cerebral cortex from mouse and human embryonic stem cells. Since then, efforts to produce three-dimensional structures have increased, with organoids of the eye, intestine, kidney, pancreas, prostate, lung, stomach and breast having been obtained.

The organoids — so called because they mimic the structure and function of the respective organs — could be used essentially to further our knowledge of diseases, to evaluate drugs with therapeutic purposes and to eventually be used to replace tissues in damaged organs. The production of organoids could be the most significant development in the stem cell field.

Nevertheless, there are still objective difficulties for equating these organoids to the corresponding tissues, since some do not include fundamental cells of the aforementioned tissues, others imitate only the earliest stages of organ development, and others give inconsistent results from culture to culture.

As mentioned, organoids have been produced since the beginning of 2000. The following table shows the organoids grown, together with their potential applications (Nature 523; 520-22, 2015). 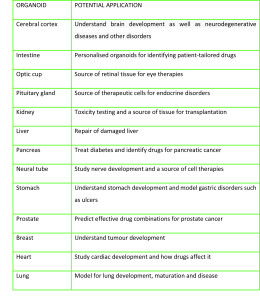