Skip to content
Home/Assisted Suicide, BIOETHICS NEWS, Euthanasia, NEWS/Euthanasia in Belgium. Since its approval in 2002 the number of “patients” is on the rise

Euthanasia in Belgium. Since its approval in 2002 the number of “patients” is on the rise

The Belgian Commission for Euthanasia Control and Evaluation reported on 2016 that 2,025 citizens had died by euthanasia in 2016 — an average of 5.5 every day. This is a record number since its legalisation, although it exceeded the 2015 record by only 3 persons. Last year not only broke the historical record, but Belgium was also a pioneer in implementing a new regulation. For the first time, euthanasia was applied to a terminally-ill 17-year-old minor (see HERE). Belgium was thus transformed into the first country in the world to remove the age limit to request assisted dying in 2014, following an intense debate. See HERE figures of the countries where euthanasia law has been approved. 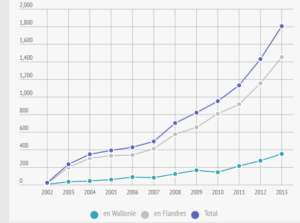 The body that records each case has not given further details of their profile, but according to reports from the previous two years, the proportion of men and women is similar, most are performed at home, a little over half are in the age group between 70 and 89 years, cancer is the most common disease, and applications from the Flemish region account for 80% of the total .