They had overcome the obstacle of using human embryonic stem cells, but that even so, a ethical difficulty remained with the producing organs formed almost entirely of human cells in experimental animals.

It seems a little excessive that, in less than two months, we have dedicated three reports to the latest studies by Juan Carlos Izpisúa and his group. Nonetheless, we believe that the importance of his work merits this level of interest.

In our first report, we referred to a study published in Nature, which describes — among other breakthroughs — the production of human-animal chimeras in order to generate quasi-human organs for use in transplantation. In the report, we mentioned the ethical difficulties evident in the study as a result of the use of human embryonic stem cells. 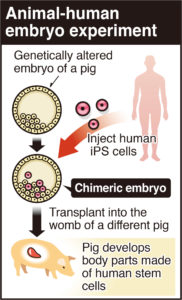 In the second, we discussed the new steps taken in the production of human organs in animals, in connection with an interview by Izpisúa published in Investigación y Ciencia (the Spanish version of Scientific American). In the interview, Izpisúa particularly stressed that, from an ethical point of view, they had overcome the obstacle of using human embryonic stem cells, but that even so, a potential ethical difficulty remained with the possibility of producing organs formed almost entirely of human cells in experimental animals.

Now, we evaluate these experiments by analysing the latest findings published in an article in scientific journal Cell (see HERE).  We also discuss another paper by a different research group, in which the authors also describe the production of human-animal chimeras, likewise with the intention of producing organs for transplantation.

The latter paper, published on 25 January in Nature , describes the experiments of a group of researchers at the Institute for Stem Cell Biology and Regenerative Medicine at Stanford University. The authors managed to develop a mouse pancreas in rats and then successfully transplant it from the rats into mice with diabetes, in which the organ functioned correctly and reversed the disease.

To that end, they injected mouse pluripotent stem cells into genetically-modified mouse embryos. The modification consisted in the elimination of a gene (Pdx1) required for pancreas formation. Since the rats were unable to create their own pancreata, the mouse cells created them. The next step was to transplant the pancreatic islets into mice with diabetes.

The results were promising, as they managed to reverse the diabetes in the mice, normalising their blood glucose levels for over 370 days. Moreover, immunosuppressants were only administered for the first 5 days after the graft, after which they were not needed since the mice’s immune system eliminated the residual rat cells.

Nevertheless, as the authors themselves note, there is still a long way to go before this technology can be applied in humans, whose organs must be created — for reasons of size and evolutionary distance — in pigs, sheep or non-human primates.

In the paper by Izpisúa’s group, published on 26 January in Cell (read HERE), the team went one step further, producing human-pig chimeras.

Like the authors of the previous paper, the researchers point out that, while the mouse is one of the most important experimental models for stem cell research, these animals differ considerably from humans (e.g. early post-implantation development, embryo size, length of gestation and rate of development), which could hamper not only the efficiency, but also the usefulness of studies with human-mouse chimeras. For this reason, Izpisúa and his team used pigs and cattle to study the potential chimeric contribution of different types of human induced pluripotent stem cells (hiPSCs).

In the paper, the researchers report advances on several fronts. First of all, they developed rat pancreas, heart and eyes in mouse embryos, combining CRISPR-Cas9 gene editing technology with the latest advances in stem cells. The mice were healthy and had a normal life expectancy, so the experiment is proof of concept that functional organs from one species can be cultured in another.

In a report published on the website of the Salk Institute (see HERE), lead author of the study, Jun Wu, says they were also surprised to observe that rat pluripotent stem cells generated a gallbladder in mice, an organ that is not present in rats: “Our rodent experiments reveal a profound secret, that a developing mouse was able to unlock a gall bladder developmental program in rat cells that is normally suppressed during rat development. This highlights the importance of the host environment in controlling organ development and evolutionary speciation”.

In a second experiment, they generated human cells and tissues in pig and cattle pre-implantation embryos, marking the first step towards the generation of transplantable human organs using larger animals whose physiology and anatomy are similar to humans. To that end, they used different types of hiPSCs, which they injected into pig and cattle embryos in order to study the capacity for integration of the different cells, to thereby evaluate their compatibility and chimeric potential. Thus, they were able to determine the most promising cell types.

In a third and final stage, they inserted the hiPSCs selected in the previous stage into pig embryos, which were then gestated in adult pigs. Pigs have certain advantages over cattle for experiments involving post-implantation embryos, as they are a multiparous species, and are commonly used as a translational model, given their similarities to humans in relation to organ physiology, size and anatomy. For this reason, the researchers chose the pig for this stage of the study. The experiment was halted at four weeks in order to evaluate the technological safety and efficacy to that point. The level of chimerism obtained was low compared to that achieved in the rat-mouse chimeras, which may reflect the greater evolutionary distance between man and pig than between rat and mouse.

The researchers implanted more than 2,000 chimeric embryos in sows, achieving 18 pregnancies. After embryo collection at between days 21-28 of development, 186 embryos were obtained. However, many of these were smaller than normal, and seemed to grow much more slowly. Wu says that “before we dream about all these downstream applications, we need to know if the evolutionary distance [between humans and pigs] prevents human cells from contributing at all” (see HERE).

“I think that it is the first step towards bringing us closer to the possibility of generating human tissues in animals, although it is still far off. Much closer are the new possibilities opened with these studies in order to understand the onset and progression of human diseases ‘in vivo’, the possibility of testing new medicines in live models and to better understand species evolution and organogenesis”, says Izpisúa in an email to Spanish medical website Diario Médico (see HERE).

Of course, although this technology is very promising from a biomedical point of view, research in this field must take various ethical concerns into account to ensure that its advance leads to real human progress.

Gretchen Vogel in Science says that “producing human-animal chimeras has been controversial for several reasons, including worries that human cells could boost the host animal’s intelligence or develop into sperm or eggs”. “Imagine, for example, the ethical nightmare that would entail if the brain of a pig housed sufficient human cells to be able to carry out high-level reasoning”, says Izpisúa.

For this reason, the United States National Institutes of Health – NIH decided not to fund these experiments. Furthermore, after convening a meeting to scientifically and ethically evaluate these studies, the Federal Agency stated, in August 2016, that a moratorium should be proposed until January 2017, a moratorium that has already been revoked.

To try to overcome this ethical difficulty, the authors propose a solution (a very attractive one in our opinion), to use one biological fact in their favour: namely, that during embryonic development, some organs, such as the pancreas and kidney, are generated through the action of a single gene, Pdx1 and Six2, respectively. They, therefore, suggest that, if the first of these genes is silenced, pigs could be produced without a pancreas, and if the second is silenced, pigs without kidneys. This could have enormous importance for their research since the stem cells from the other organism will colonise the space left by the missing organ. Using these possibilities, and “the elimination of the only gene needed for the development of a pancreas, our laboratory has created pig embryos that do not generate the insulin-producing organ, unless that we inject sufficient stem cells that carry the missing gene. If the added cells divide appropriately, they will give rise to a mature organ formed entirely of human cells. If all goes well, the rest of the animal will be made up of porcine cells” (see HERE).

Furthermore, we could avoid “this problem, the creation of quasi-human organs, by deleting the genetic program that directs the neuronal development of all hiPSCs before injecting them. Then, even if these cells manage to migrate to the embryonic niche responsible for brain growth, they will be unable to continue developing. The only neurons that would manage to do so would be one hundred percent porcine” (see HERE).

If this technical solution is consolidated, the second ethical difficulty mentioned — namely that quasi-human brains or germ cells could form in organ-producing chimeric animals — might be resolved.