Hospital care. An ethical reflection on the Ashya King case

Media coverage of the case of Ashya King, a 5-year-old English boy with hospital care wich was diagnosed with a malignant brain tumour, has done little to clarify the drastic measures taken by the English authorities, after a complaint was filed against his parents by Southampton General Hospital, for having deprived a minor with a life-threatening condition of proper medical care.

with hospital care wich was diagnosed with a malignant brain tumour, has done little to clarify the drastic measures taken by the English authorities, after a complaint was filed against his parents by Southampton General Hospital, for having deprived a minor with a life-threatening condition of proper medical care.

The parents had stated since the child had been diagnosed with medulloblastoma (a type of serious brain cancer) that they did not wish to subject him to the intensive radiotherapy treatment proposed by the hospital, as they considered it very aggressive; moreover, they also believed that the most serious side effects could be avoided with proton therapy. When the hospital told them that they could not receive any other treatment apart from the one they could offer, they decided to flee the country without seeking medical approval in order to avoid further delays, taking advantage of temporary approved leave while the child recovered satisfactorily from an operation. Hence, they came to Spain on 28th August this year, with the intention of selling their house in Malaga, to meet the very high costs of the chosen treatment and to be able to go immediately to Prague so that the boy could undergo the aforementioned therapy.

As a result of the European arrest order imposed on the parents following the complaint by the English health authorities, they were arrested by Spanish police in Malaga and kept in isolation for several days, during which time, the child remained in hospital. The English authorities also withdrew the couple’s parental rights.

Following intensive efforts made by the child’s parents, Brett and Naghemeh King, and the Spanish lawyer who took the case, the English authorities eventually suspended the measures taken against them.

On 9th September, 11 days after leaving England, Ashya arrived with his parents at the Proton Therapy Center in Prague. On Tuesday 16th, the press released a statement from the director of the Centre on the health of the child, saying: “More and more smiles and now he’s moving, he’s improving slowly, because more time has passed since the operation” (Czech press “CT24”, 15/9/2014). Beyond these facts, we believe it is important, in order to make an ethical evaluation of the case, to determine if proton therapy can be as effective as conventional radiotherapy and if the case of Ashya really was life or death, as the hospital reported.

With respect to endangering the life of the child, unless there are any other circumstances that have not been made public, and in view of the fact that the parents were allowed to leave the hospital with the child, the danger of imminent death alleged by the English hospital appears to have been overstated.

For all these reasons, and also taking into consideration information on the child’s health that was published while he was in hospital in Prague, it seems ethically unacceptable that the English hospital could not allow the parents to use the therapy that they preferred and could pay for (which was not available in the United Kingdom) and furthermore, made the complaint against them in such over-the-top terms.

Proton therapy appears to be more specific than conventional radiotherapy. Due to its characteristics, the proton beam can selectively reach the tumour area, scarcely damage nearby tissues, which seems crucial in a treatment of this type. Along the same lines, the specialists at the Czech clinic state that, “Proton therapy is a treatment that enables the highest doses possible to be given without affecting the surrounding tissue. A very important characteristic if we consider than in the vicinity of the tumour are the centres that regulate the heart, lung, liver and intestines. Proton treatment reduces the risk of damaging these brain centres and unwanted side effects.”  (Czech press “CT24”, 15/9/2014).

Our ethical opinion regarding this specific case is sufficiently explained in the text above. However, a further reflexion may be useful on how patient autonomy should be reconciled with medical knowledge to determine which type of treatment should be applied in each case.

There is no doubt that on specific occasions, like this one, they may be a conflict between the views of the patient or their representatives, as regards the type of therapy they wish to apply and what the doctors think. 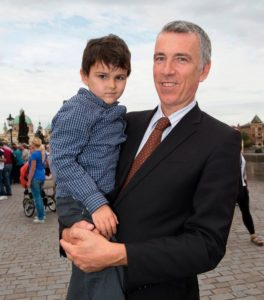 From an ethical point of view, patient autonomy should of course always be respected, but it is a fact that the patient does not always know what is the best treatment for him or her. In this respect, we believe that the most important, and therefore critical factor, is that the medical staff have sufficient ability and knowledge to convince the patient of the advantages of the treatment that he or she requires, to thus be able to apply it. However, if they cannot come to a mutual agreement, we believe that the patient’s autonomy should be respected

It is interesting to highlight that the press office reported that the English health authority had agreed to assume the costs of the 5-year treatment of Ashya King in Prague, which we believe is a very positive change of attitude.

For the reasons stated above, in the case of Ashya, we believe that the parents’ decision was correct as regards taking the approach that they believed best for the well-being of their son; in this respect we believe that the London hospital should have arranged things so that this decision could have been taken without any further problems.

Recently Ashya King parents stated that “nearly three years later, the youngster’s brain tumour has gone, according to his dad, and he is now back at school with his friends (see photo above).