Planned Parenthood special report. It performed more than one million abortions worldwide in 2016

One of the most active organizations in promoting abortion has crossed the line of respect for life. In 2016, the International Planned Parenthood Federation (IPPF),  for the first time in its history, aborted more than one million boys and girls in a single year — specifically 1,094,679 children — using both surgical and medical abortion (see HERE ).

The IPPF also carried out 3.6 million abortion-related activities, such as counseling, consultation and diagnosis, according to recent figures from the IPPF itself (see HERE ). 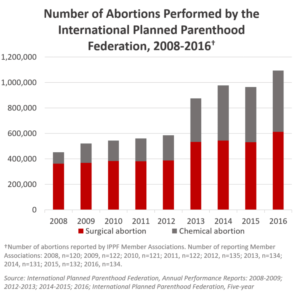 International Planned Parenthood Federation (IPPF),  for the first time in its history, aborted more than one million boys and girls in a single year

The Federation has its head office in London, and from there maintains an extensive network of affiliated members throughout the world, who actively promote abortion and related activities, particularly the use of abortifacient contraceptives. There are 142 Member Associations active in 171 countries.

The IPPF also distributes millions of Euros among the Member Associations and other similar organizations, which use these resources to operate in different countries; in 2016, this amount 2016 reached 68 million US dollars.

Promotion and supporting activities in favor of abortion

Additionally, it promotes and supports activities in favor of abortion — 950 since 2005 (see HERE ) — as well as pro-abortion legislative initiatives, this being one of their priorities for the period 2016-2022.

Another priority of the IPPF is the promotion of sex education programs, contraceptive methods and abortion-related services among young people, in order to make them what they call “youth-friendly”. In this respect, in 2016, it dedicated more than 28 million dollars to these programs, 9% more than in 2015 (LifeNews Note: Jonathan Abbamonte writes for the Population Research Institute).

These are certainly very specific and well-documented data of the aims pursued by the IPPF and the resources it allocates towards them, facts that are worth disseminating in order to have a more objective idea of the ends and means that this association dedicates to its goals.

Last February President Trump signed an executive order barring federal funds (see Washington Post, January 24, 2017) from organizations that promote abortion around the world, including the International Planned Parenthood Federation. It remains to be seen what effects this measure will have on the overall number of abortions during 2017.

*See the “Biological status of the human embryo”