The Catholic University of Valencia’s Bioethics Observatory has given a lecture at the European Parliament in Brussels as part of the annual Week for Life which One of Us participates since the launch of the European Citizens’ Initiative. The lecture was given by Dr Enrique Burguete, anthropologist and delegate member of the Bioethics Observatory, on “Transhumanism and the emancipation of human nature. First signs” in the session “Transhumanism: responsibility in the time of robots”. 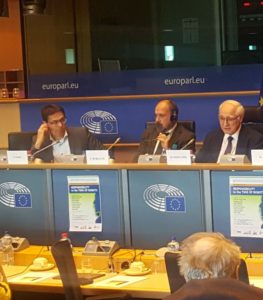 In his lecture, Dr Burguete assessed the transhumanist proposal from the concepts of dignity, progress and emancipation, concluding that transhumanism does not represent true human progress, because insofar as it emancipates man from his biological nature, it extinguishes his essence. He also highlighted that the aim of overcoming the vulnerability of human nature is not achieved by destroying human nature itself, but by valuing vulnerability as a constitutive characteristic of our being, which opens us to solidarity with those who suffer as members of our same family, the community of persons.

He also warned that the transhumanist drift has its turning point in the gender perspective, which calls for the “self” to be redefined by emancipating the feeling of the sexed body itself and its functionality.

Transhumanist drift has its turning point in the gender perspective, which calls for the “self” to be redefined by emancipating the feeling of the sexed body itself and its functionality.

Burguete finally urged the restoration of talks on the ends of nature, based on the biomedical sciences, philosophy and natural law, all from the deepest respect towards members of groups presumably safeguarded by the gender perspective, whose dignity was strongly underlined.

The above mentioned  session  on “Transhumanism: responsibility in the time of robots” was chaired by MEP Miroslav Mikolasik and his colleagues Marijana Petir, Alojz Peterle, Tunne Kelam, György Hölvenyi, Pavel Svoboda, Andrzej Grzyb, Peter Liese and other members of the European Parliament, and was also attended by representatives from member institutions of One of Us and the general public.

European One of Us Federation Ordinary General Assembly 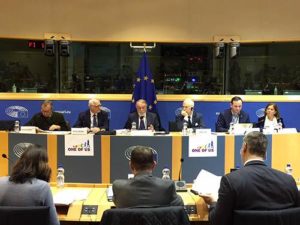 President of One of Us, Jaime Mayor Oreja, opened the General Assembly of the European social network to representatives of numerous international associations, announcing the meeting that will take place in Valencia on 26 May at the Catholic University of Valencia to present a new cultural platform. This will bring together leading thinkers from throughout Europe and will be a major source of reflection at world level.

The Bioethics Observatory applied to join the association, and through Carmen Mateu, professor at the University, presented the research lines currently being followed, such as CRISPR gene editing, transhumanism, end-of-life and gender ideology, highlighting particularly her work in bioethical aspects of the beginning of life. She also announced a new line of st 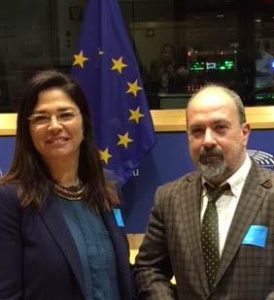 udy on which she is working from the Observatory: Birth rates and demography. Her application was unanimously accepted, together with that of other important European institutions.

The European citizens’ initiative One of Us was launched by a group of citizens from countries in the European Union to demand that community institutions guarantee the protection of human beings from conception in the areas of competence of the European Union.

This initiative brings together almost all pro-life and pro-family organisations within Europe, and has been the most successful initiative to date in terms of number of signatures collected (2 million) and number of countries involved.

The European Federation is made up of 25 European associations, combining strengths with the clear aim of fighting for the defence of all human life.