Serious concern for science. European academics are failing abysmally when it comes to reporting the results of clinical trials

European academics are failing abysmally when it comes to reporting the results of clinical trials, a study has revealed.

An analysis of data from the European Union’s Clinical Trial Register — published in The BMJ1 on 13 September — shows that around 50% of the listed trials have not complied with guidelines that say results must be reported within 12 months. 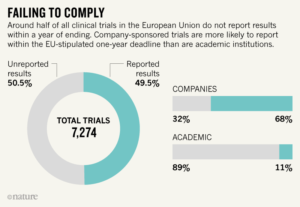 The researchers who conducted the analysis found that only 11% of trials run by academic centres — such as those led by universities, governments, hospitals or charities — had published outcomes after completion (see ‘Failing to comply’’).

Ben Goldacre, head of the Evidence-Based Medicine DataLab at the University of Oxford, UK, and lead author of the study, says this is a serious concern for science and affirms “For academics, the reason for not reporting results may be a matter of poor knowledge management or staff turnover, where a clinical academic has gone back to work as a doctor,” Goldacre says. “But equally, some people may have an ideological commitment to a particular treatment, which may lead them to, either consciously or unconsciously, slow down the dissemination of findings contradicting that treatment.” (Nature, September 13, 2018).