As is known, few people have had such a strong impact on nursing and healthcare as Florence Nightingale (1820-1910), whose bicentenary is commemorated this year. But the headline of the article, “saving lives with statistics,” taken from the BBC (read HERE), accurately reflects one of her most defining aspects. No one could better embody the values so necessary to reverse a health crisis: 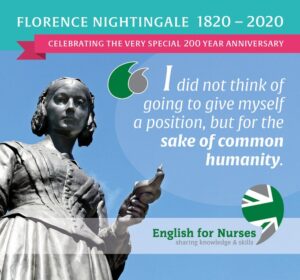 Florence Nightingale has left us a living example that deserves our remembrance and thanks. Born into an affluent English family, her life would have passed quietly devoted to social relations had she had followed Victorian Britain’s rules in a male-led society. It followed another path, however, which led her to contribute significantly to the improvement of the healthcare system. There is no effect without a cause, and in the case of Nightingale, we can highlight two factors that determined her life trajectory.

Her father, contrary to prevailing customs, decided to give his two daughters a proper education that he himself helped to impart. They learned Italian, Latin, Greek, philosophy and history, and had excellent training in mathematics. And so from a young age, Florence developed a fondness for statistics, then in incipient development.

At that time, the first steps were being taken in the application of statistics to behavioral sciences, population studies, economics and medicine. Florence was set on the field of health from the outset, and imbued with a reverential obsession with collecting systematized information to obtain results.

The other key factor was her deep Christian faith, present in all her life decisions, which prompted her to dedicate her life to the service of society. She considered it a moral imperative to pursue nursing as a means of contributing to the wellbeing of society, and she chose to follow her vocation as a nurse, defying all family pressures. To this end, she was trained in Germany and took advantage of family trips to Italy and France to collect information on the health of the populations she visited.

Already in the exercise of her profession, she was sent with a team of 38 nurses to the Crimean War (1854-56), where she had the opportunity to showcase her preparation and commitment. She engaged in energetic multi-faceted activity that resulted in the improvement of sanitary conditions in the hospitals, cutting mortality rates. Her dedication to the care of wounded soldiers was recognized by the press and the public in Britain. Her image doing night rounds of the wounded in a hospital, published in the “Illustrated London News”, triggered a wave of popularity; she would later be known as the “Lady with the Lamp”, as defined in that iconic image. The dissemination of her work had a great influence on society, and indeed Henry Dunant acknowledged this influence had led him to found the Red Cross.

Florence paid a high price for her unconditional dedication in her professional role: an infection left her an invalid for the rest of her life.

Florence Nightingale defining aspect demonstrating the real causes of mortality and propose changes to prevent them.

But the most far-reaching consequences came from her training in statistics and her persistence in the collection of systematized information, which led her to demonstrate the real causes of mortality in hospitals and to propose changes to prevent them.

The rest of her long life was devoted to proving that statistics provide an organized way of learning from experience, and that medical statistics can shed light beyond the simple fact that unsanitary conditions kill. Much more than a century before the term “evidence-based medicine” was coined, Nightingale was using statistical evidence to achieve improvements in patient care and outcomes.

As she herself wrote, the uniform and accurate hospital statistics would lead to improvements in medical and surgical practice.

Florence Nightingale remains blissfully in the collective memory, as many hospitals around the world are named after her. Nevertheless, the decision to name the largest field hospital in London after her in these times of pandemic is especially meaningful.