The news that commercial surrogacy has been legalized with significant financial support by New York State is paving the way to its normalization, being a new type of commercial contract involving three parties: the biological parents, the surrogate mother and the child.

Surrogacy commercial contract makes gestational woman and the same child a disposable object, something that can be instrumentalized, similarly objectifying him. 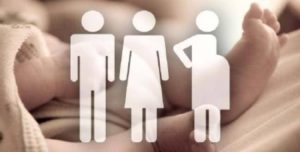 Three-person contract, the biological parents, the surrogate woman and the child.

Our Observatory has published a lengthy article on the issue in The Linacre Quarterly journal (June 17, 2020), with the title “Gestational surrogacy: current view”. The following is the Abstract of the paper, which has now become particularly relevant, given the current strong trend towards including this type of contract in different legislation, increasing the financial market interest in this growing field.

Surrogate motherhood is an assisted procreation practice by which a woman gestates an embryo with which she has no biological relationship on behalf of a contracting couple or individual, having to relinquish the child to them after its birth. This practice normally entails a financial remuneration for the pregnant woman; when this is not the case, it is called altruistic surrogacy. From a medical perspective, potential problems for the surrogate and for children born through this practice should be taken into account, especially the existence of possible disabilities in the child. The bioethical aspects are of most interest because the practice of surrogacy objectifies the expectant mother, by using her body for a purpose other than her own good, treating her as a commodity, as a thing. The same is true for the child because it makes him a disposable object, something that can be instrumentalized, similarly objectifying him.