The current pandemic has highlighted the role of biopolitics in bioethics. From personalist ethics, the issue has particular interest. The way in which governments, states and supranational institutions calculate, control and manage entire populations and demographic groupings could affect the human rights of the population, but also allow an effective response in extreme health risk scenarios. We have already addressed several issues (read HERE and HERE) such as clinical trials, vaccination and others that raise several major ethical concerns (Read our article Africa needs an urgent plan for vaccination).

Health care in armed conflicts is a bioethical and 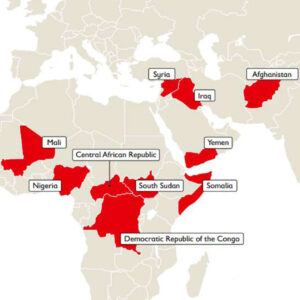 The current situation in countries with conflicts is a tremendous bioethical and humanitarian challenge for providing aid to developing countries, mainly in the provision of health care and medicines to the affected zones. This is not an easy task given the continuous increase in violence, displacements, and conflicts in the midst of the COVID-19 pandemic.

On January 24 this year, the British journal The Lancet presented the BRANCH series on women and children’s health in conflict, aimed at providing insight into basic health care in countries experiencing armed conflict. Nine of the ten countries with the highest neonatal mortality rates in the world are in conflict (read the full article HERE).

The general public is not always aware of the magnitude of these conflict areas, the complexity of them and poor communication systems, because political interests do not allow us to have a true overview of the magnitude of the crisis.  In this respect, the Lancet report gives consistent data. We excerpt some of those we consider to be most illuminating.

To complete this overview, the Lancet’s Branch Series reports that, “From geospatial analyses, we estimate that the number of non-displaced women and children living dangerously close to armed conflict (within 50 km) increased from 185 million women and 250 million children in 2000 to 265 million women and 368 million children in 2017. Women’s and children’s mortality risk from non-violent causes increases substantially in response to nearby conflict, with more intense and more chronic conflicts leading to greater mortality increases. More than 10 million deaths in children younger than 5 years can be attributed to conflict between 1995 and 2015 globally” (read more HERE).

Read our article published several years ago, Figures of deaths and displacement, due to war, totalitarian governments and religious persecutions never seen since World War II

The study reports the serious situation of health personnel and public health infrastructure in these areas of conflict: “Between January and September 2019, there were 825 confirmed attacks on health workers [our emphasis] and facilities in areas of conflict, killing some 171 health workers and injuring more than 700 others [our emphasis. Hospitals and clinics continue to be attacked, and at least some are deliberately targeted.”

Our Observatory has published articles about the urgent need for equity in providing COVID-19 vaccines to countries with fewer resources (read HERE and HERE). However, this immense task could jeopardize an effective response to these also urgent requirements of these vast populations.

In this respect, we welcome the Lancet new Commission and the supranational work on these issues. In our opinion, the media has also a great responsibility to provide objective and continuous information on the needs of this changing and immense reality, in particular on how governments, states, and supranational institutions act to provide an adequate solution to this urgent global need.

Summary of BRANCH series on women and children’s health in conflict, directed to treat the basic health care in countries experiencing armed conflict,

Paper 1 – The political and security dimensions of the humanitarian health response to violent conflict.

Paper 2 – The effects of armed conflict on the health of women and children.

Paper 3 – Delivering health interventions to women, children, and adolescents in conflict settings: what have we learned from ten country case studies?

Paper 4 – Delivering health and nutrition interventions for women and children in different conflict contexts: a framework for decision making on what, when, and how.