The New York State Legislature passes the so-called Child-Parent Security Act – CPSA which became effective last February. Ex-Governor Cuomo was making it a priority to repeal the ban on gestational surrogacy to help fight for the rights of LGBTQ couples and people struggling with fertility.

Until now, only two American states have legislation supporting gestational surrogacy but with more restrictions than CPSA. Louisiana law prohibits compensated gestational surrogacy and limits uncompensated surrogacy to heterosexual married couples using their own egg and sperm only (Surrogacy Bill HB 1102). Michigan law declares all surrogacy contracts void and unenforceable as contrary to public policy and imposes criminal penalties if the contract provides for surrogate compensation (Michigan Surrogate Parenting Act MCL § 722.851 (read HERE). Now Wyoming joins the aforementioned states with a law that includes the surrogate mother in the birth certificate allowing uniquely heterosexual couples with a surrogate mother who could only receive the expenses of the gestation (read HERE).

Related to this, CBS News (August 5, 2021) reports that Biden Administration announced a change in the current legislation that will allow children born aboard to parents who used IVF technology included surrogacy to qualify for U.S. Citizenship.

Gestational surrogacy is being debated in Western countries, and indeed there are few countries that allow it. We have published several articles on this issue, highlighting the humanitarian, ethical, medical and legal concerns (read HERE). Read also our article published in Linacre Quarterly HERE.

CPSA legalizes and regulates such commercial contracts of intended parents and surrogate mothers and imposes rules intended to protect gestational mothers, intended parents and babies. The New York State Catholic Conference had criticized the CPSA that promotes surrogacy contracts that are used to exploit surrogates around the world (Business News, Dec. 30, 2019). 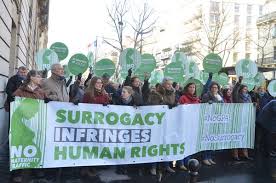 According to a new report discussed in GlobeNewswire, “Technological advancements in assisted reproductive technologies, rising awareness regarding infertility treatment, and a growing number of fertility clinics will drive the surrogacy market growth over the forecast period”. In fact, the global surrogacy market is expected to pass $27.5 billion by 2025.