Human overpopulation of the earth myth

Is our planet really overpopulated?

The problem of human overpopulation of the Earth is often raised in different social settings and especially in some media, often resulting in the promotion of antinatalist policies. But is our planet really overpopulated? 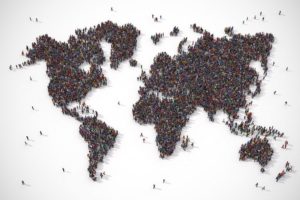 This is a complex issue that is impossible to address here, but we would like to provide some information extracted from an article by Norbert Treitz, professor of physics at the University of Duisburg-Essen (Germany), published in Investigación y Ciencia  (Scientific American – July 2014, pages 86-89).

Treitz provides some interesting facts on the heterogeneous distribution of the population in different regions of the world.

On average, 13 persons per square kilometre live on the surface of the planet, around 50 on terra firma. In view of the extensive unpopulated regions on Earth, this is a huge number. We, humans, are very unevenly distributed in the different regions and countries. Moreover, the closer we look at the situation, the more deviations we find with respect to the average.

Among the European countries, Holland holds the record, with 402 inhabitants per square kilometre, although it is surpassed by the German region of North Rhine-Westphalia, with 523. Topping the world list is Bangladesh, with around 1,000 inhabitants per square kilometre. However, it is overshadowed by tiny countries like Monaco and the Vatican, and particularly districts with no parks in major cities; around 40,000 people per square metre live in the 11th arrondissement (district) of Paris, between the metro stations of Bastille, Nation and République. If they all lived at ground level, the average distance between two individuals would be around five metres.

Here all of mankind could swim

Get your facts first, then you can distort them as you please. Mark Twain

However, the fact that most drew our attention in Treitz’s article refers to Lake Victoria, in Africa. Treitz states, “We now consider Lake Victoria, with its 69,000 square kilometres – all of mankind could go swimming there. This would cause the water level to rise by 4 millimetres, with a density of bathers of more than 100,000 per square kilometre. This would be equivalent to a network of people about three metres apart, so carrying out the experiment would not be too inconvenient (except having to travel several hundred kilometres on the surface of the water, which would be costly and would have to be well planned). In other words, according to Treitz “all the inhabitants of the earth could splash around at the same time in Lake Victoria at a comfortable distance of 3 metres apart”. Clearly, this is not a definitive piece of information, but it does make us think about whether our planet Earth really cannot possibly accommodate any more people, or if could be a comfortable habitat for new inhabitants.