Skip to content
Home/Ethics of Scientific Research, Genetics and Genomics, Human embryos, SPECIAL REPORTS/Legal aspects to take into account in the case of genetically modified babies in China

The news has come to light in numerous media: Chinese researcher He Jiankui and his team at SUSTech (Southern University of Science and Technology of China) in Shenzhen have produced the first two genetically-modified human beings using the CRISPR-CAS9 technique (read our report Open ethical debate: Are gene editing techniques ethical in reproductive medicine?). 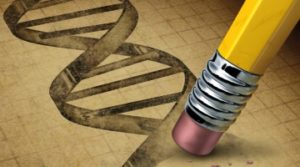 Insofar as the experiment has not been published in any specialized medical journal, the surprise of the University itself because the researcher was on leave and had not reported anything about the research, the lack of knowledge of how exactly the experiment was carried out, among other reasons, means that the information that we have for now is incomplete and, therefore, is not sufficiently verified, which is why this assessment must be governed by the Precautionary Principle.

Why do we talk about the Precautionary Principle? For two reasons:

1) the cautiousness when leaving written evidence about an experiment for which many data are unknown, and

2) the Precautionary Principle, specifically, is a basic and fundamental legal principle in Biolaw, especially since the Ruling of the Court of First Instance of the European Union on 11 September 2002, known as the Virginiamycin Judgment. 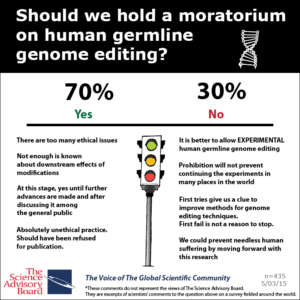 This Principle, which has been translated into bioethical legislation, goes on to say that the function of protection, safeguarding and, if applicable, prohibition and sanction of the Law must act and be applied when there is uncertainty and unpredictability regarding the consequences (especially the risks) that may be derived from particular research or experiments. Moreover, the lack of information means that several topics cannot be addressed, especially those that, in this specific case, affect Biolaw, such as informed consent, and confidentiality and secrecy of biological and biomedical data of a personal nature relative to the health of the parents and the babies; and finally, whether the experiment was subject to the controls that must be carried out by the corresponding Committees, both scientific and ethical, although in this respect it is feasible to suspect – although it remains conjecture – that this legal requirement was not met, since the University was not informed.

Thus, leaving aside the exclusively bioethical assessment, which corresponds to another section of this Report, and taking into account that Chinese legislation is not the same as International and European law, based on what we know at present, we shall try to answer the following questions:

a. Does the experiment covered in this bio-legal analysis violate bioethical laws, national or international?

b. If so, is the reason only the Precautionary Principle?

To answer these questions, we shall descriptively differentiate what International and Spanish legislation say in this respect.

UNESCO UNIVERSAL DECLARATION ON THE HUMAN GENOME AND HUMAN RIGHTS

Article 5.a: “Research, treatment or diagnosis affecting an individual’s genome shall be undertaken only after rigorous and prior assessment of the potential risks and benefits pertaining thereto and in accordance with any other requirement of national law”.

Article 24: ”The International Bioethics Committee of UNESCO should contribute to the dissemination of the principles set out in this Declaration and to the further examination of issues raised by their applications and by the evolution of the technologies in question. It should organize appropriate consultations with the parties concerned, such as vulnerable groups. It should make recommendations, in accordance with UNESCO’s statutory procedures, addressed to the General Conference and give advice concerning the follow-up of this Declaration, in particular regarding the identification of practices that could be contrary to human dignity, such as germ-line interventions”.

The last sentence should be interpreted as prohibiting such interventions.

Article 13: “An intervention seeking to modify the human genome may only be undertaken for preventive, diagnostic or therapeutic purposes and only if its aim is not to introduce any modification in the genome of any descendants”.

Point 89 of the Explanatory Report to the Convention, after stating that knowledge of the human genome and its application has positive aspects, says that it is nevertheless true that it can also endanger the individual and the species itself: “The ultimate fear is of intentional modification of the human genome so as to produce individuals or entire groups endowed with particular characteristics and required qualities”.

Article 18.2: “[…] prohibits the creation of human embryos with the aim to carry out research on them”.

Point 116 of the Explanatory Report to the Convention says that “The article does not take a stand on the admissibility of the principle of research on in vitro embryos. However, paragraph 2 of the Article prohibits the creation of human embryos with the aim to carry out research on them”.

The European Union tangentially regulated human germ line gene editing in the European directive on the legal protection of biotechnological inventions, approved on 6 July 1998. In the non-operative part it states: “Whereas there is a consensus within the Community that interventions in the human germ line and the cloning of human beings offends against ordre public and morality” (Whereas clause 40). Accordingly, in the regulatory part, it prohibits patents of “processes for modifying the germ line genetic identity of human beings” (art. 6, 1, b).

Three important conclusions can be drawn from all this: