Several countries and some North American states have recently legalized euthanasia and assisted suicide, including Canada and the State of California in the US.

In 2017, more than 13,000 patients died worldwide by assisted suicide in countries in which these practices are legal.

Euthanasia and assisted suicide have been legalized in the Netherlands and Belgium since 2002, assisted suicide in Switzerland since 1918 and in the state of Oregon in the US since 1997. Read our report Medical, legal, social and bioethical assessment of euthanasia. 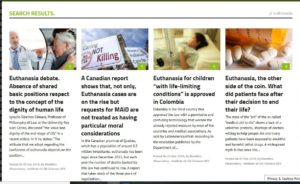 As we know, the fundamental difference between assisted suicide and euthanasia is that in the former, it is the patient him or herself to ingests the lethal drugs given to them, while in euthanasia, they are administered by the healthcare-giver.

The rise in assisted suicide in Switzerland seems to be — among other reasons — because virtually any type of patient may obtain permission, even if they are not terminally ill, while in Oregon, only patients with a life expectancy less than 6 months may do so. It should be noted though that, in Oregon, 36% of patients who request assisted suicide did not carry it out and died of their illness.