3D bioprinting for regenerative medicine and to produce organs. State of the art and an ethical reflection

A recent article published in the Journal of Stomatology, Oral and Maxillofacial Surgery (Volume 120, Issue 2, April 2019, Pages 128-132) made a great review with the suggestive title 3D Bioprinting: principles, fantasies and prospects. It is based on a PubMed/MEDLINE search that was performed with 40 publications. The article, in our opinion, shows an updated state of the art.

What is this technique and what is bioink made of?

As we have said in different articles (see HERE) this technique opens an avenue for regenerative medicine and the possibility of obtaining organs for transplantation. But like any new biotechnological advance, it is necessary to know the current state of this technique and its possible ethical difficulties. 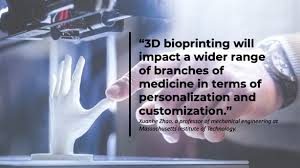 In this sense, we extract from the article what in our opinion is more relevant for understanding the technique and its possible applications. The study says, “Conventional three-dimensional (3D) printing techniques have been growing in importance in the field of reconstructive surgery. Three-dimensional bioprinting is the adaptation of 3D printing techniques to tissue engineering, through the use of a bio-ink containing living cells and biomaterials. To date, most of the tissues have been printed with promising results in vitro (e.g., skin, cartilage, and muscle). The first animal studies are promising for small-scale defects. Vascularization issues are the main limitation of printing large constructs. Once the barrier of vascularization is overcome, printing organs and composite tissues of any size could be possible, opening the doors for personalized medicine based on medical imaging. Printing custom-made autologous grafts or flaps could minimize donor site morbidity and maximize the morphological results. Considering the potential future applications of bioprinting in the field of reconstructive surgery, one has to be aware of this tool, which could drastically change our practice. The authors (some of them Several applications are now routinely used in facial surgery, including printed anatomical models that are used for teaching and surgery planning [2] and industrial printing of metallic objects to allow for prototyping of personalized surgical guides and plates [3]. The main point of interest in current applications for reconstructive surgery is better precision, but the morbidity of donor sites remains the same as in classical techniques. Three-dimensional bioprinting is a combination of 3D printing and tissue engineering. The potential therapeutic interest in this type of 3D printing could change the face of reconstructive surgery, increasing precision and suppressing the need for donor site or immunosuppressive treatments.”

The authors (french scientists of the field of reconstructive surgery) say later, “The three pillars of tissue engineering are cells, scaffold, and signals (growth factors). The success of in vitro tissue culture is judged on the self-synthesis of the matrix and the multiplication of cells. There has been a major advancement in tissue engineering techniques in the field of skin substitutes. Today, skin substitutes are obtained in vitro from the culture of keratinocytes, issued from a small skin biopsy. After 4 to 6 weeks of culture, the autologous epidermal sheets can be grafted. This has changed the management of severe extended burns [8]. Unfortunately, this type of in vitro substitute is not available for other tissues.” 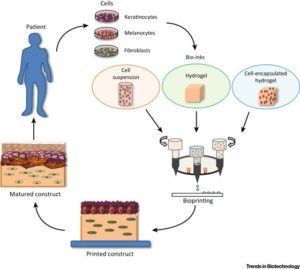 They concluded that “The enhanced control of microarchitecture is the main interest of bioprinting compared with classical tissue engineering. Indeed, in bioprinted samples, the cells and the particles – bioink composition – are spread with a uniform distribution, whereas classical deposition leads to accumulation of cells and particles at the bottom of the sample due to gravity.” 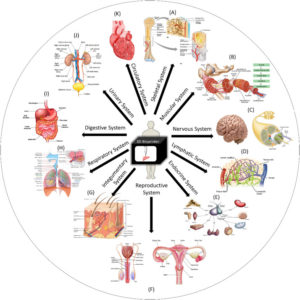 The study presents the future development of this technique as an ineluctable fact and says “Most of all, reconstructive surgery would be highly optimized with printed composite tissues. Instead of harvesting a large free flap, only a small biopsy of each type of cell would be necessary, with a great improvement on donor site morbidity. […]After mixing the patients’ cells and biomaterials, the autologous free flap would be printed, including a vascular network connected to the main vascular pedicle placed on demand.

Future reconstructive procedure according to the study

The study describes an imaginary procedure to explain the future of this technique and affirms, “In this way, we could imagine 2-step management for patients waiting for a reconstructive procedure. In a first 1-day appointment, the patient would have multiple biopsies under local anesthesia and would have a reference imaging. The custom-made free flap could then be printed and disposed in a bioreactor. A few weeks later, once the flap is functional, the surgery to implant the free flap could be performed. In the same way, autologous organs could be printed, with no need to wait for a donor and no indication for immunosuppressive medication. It would also put an end to illegal trade in human organs. In the specific situation of face transplantation, this would be of a major benefit to resolve the identity issue by creating a graft similar to the original face.

Considering that the medical profession is aiming toward personalized treatments and that social and technological evolutions are responsible for a decrease in the number of organ donors due to the reduction in accidental deaths, 3D bioprinting might be a very promising solution. In a more distant but considered ineluctable future, years’-long outer space travel will be the theatre of complex surgery in confined environments where no available tissue or organ donors will be found. This is actually a priority for all space agencies, and programs are already targeting this challenge, such as the current Vascular Tissue Challenge launched by NASA.”

Regarding regulatory and socio-ethical issues, the study says “The emerging applications of bioprinting are ‘‘difficult to fit into current legislative pillars or categories. Moreover, one of the key challenges in regulating additive manufacturing is the acknowledgment of the fact that biological and non-biological materials are regulated in different ways.’’ The issue is being treated at the European Parliament.

Ethical concerns to be resolved

The study finishes its work with these considerations that also our Observatory support. “One of the main ethical concerns is that bioprinting ‘‘is a costly procedure that is available mostly to those who can afford such treatment. The high cost of the bio-printing manufacturing process and the required production capacity raise social and distributive justice questions and issues of fair or equal access given also the highly individualized character of the products’’. Moreover, bioprinting ‘‘might be (mis-)used to improve organs by adding functions or interbreeding human cells with those of animals to give the patient a competitive edge over other individuals” (enhancement). “These legal and socio-ethical challenges must be anticipated in order to get the best out of bioprinting.”