We have published two articles on this issue, both in the first stage of health authorities’ approval (see HERE  about Holoclar and a more recent promising finding, see HERE) on this matter. 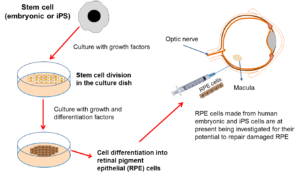 Last September, an article published in NATURE Journal (September 2, 2019) affirms “A Japanese woman has become the first person in the world to have her cornea repaired using “induced Stem Cells” (iPS) (See more). The woman had a disease in which the stem cells that repair the cornea had deteriorated. The team led by ophthalmologist Kohji Nishida from Osaka University created sheets of corneal cells from iPS (reprogrammed adult cells), obtained from skin cells. The woman’s vision has improved substantially and remains so one month after the intervention. Thus far, people with cornea problems are generally treated using donor corneas, but there is a long waiting list. If this technique is consolidated, it could alleviate this serious medical and social problem. The Japanese health ministry has authorized Nishida to use his procedure on another four patients. From a bioethical point of view, the technique has no problems, since the iPS cells were obtained from adult skin cells from the patient herself.

In this same respect, a recent article published in PHARMAFIELD (October 31, 2019) says “The first NHS funded patient with

limbal stem cell deficiency (LSCD) caused by chemical eye burns has been treated with Chiesi’s stem cell treatment. Holoclar is the first advanced therapy medicinal product containing stem cells to be approved in the European Union (EU) […] Professor Francisco Figueiredo, Consultant Ophthalmologist at the Newcastle upon Tyne Hospitals NHS Foundation Trust and Professor of Ophthalmology at Newcastle University who treated the first NHS funded patient following NICE approval, said: “In Newcastle, we are a leading center with an international reputation in autologous limbal stem cell transplantation, and our significant scientific research and clinical experience in limbal stem cell deficiency has led to us having proudly performed the first Holoclar treatment on an NHS patient. This operation was the first of a series that may benefit a number of blind patients over the next few years, not only from Newcastle but from across the whole of the UK, helping to restore their sight and comfort.”

Reduced the risk of infection by iPS cells when transplanted

Japan is a pioneer in iPS cells. Our Observatory is following this technique from the beginning

The aforementioned article about Japan’s successful treatment with iPS (reprogrammed adult cells) says: “Japan has been ahead of the curve in approving the clinical use of iPS cells, which were discovered by stem-cell biologist Shinya Yamanaka at Kyoto University, who won a Nobel prize for the work. Japanese physicians have also used iPS cells to treat spinal cord injury, Parkinson’s disease, and another eye disease.