Production of organoids. A research to study spinal development

Research with organoids, 3D organ models obtained in vitro from stem cells, has progressed rapidly in recent years (see more HERE), particularly in the development of embryoids. These special organoids model parts of the embryo and thus allow the study of embryonic development (read HERE) without resorting to embryo manipulation, which is very positive from an ethical point of view. 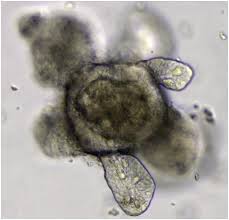 Both groups have developed early-stage embryoid models in order to study the oscillating genetic clock that controls the development of embryonic structures called somites, which give rise to the vertebrae that protect the spinal cord. Until now, the little knowledge we had of this process was based almost entirely on research on animals due to the technical and ethical barriers to the study of human embryos in culture. This research “will undoubtedly help to advance our understanding of the molecular basis of normal segmentation and to reveal the genes that, when mutated, lead to the development of disorders of the spine” (Find entire comment on these publications HERE).

Scientific and ethical point of view

Research with embryoids is not free from ethical problems (read HERE), mainly the possibility that, in the future, the embryoids will improve to the point of being able to constitute true artificially obtained embryonic life; lines of research in this area that use stem cells of embryonic origin also raise ethical concerns. However, in the cases discussed, induced pluripotent stem cells (iPSC) were used, and the embryonic models obtained were partial. Thus, they had none of the aforementioned ethical drawbacks, and we can, therefore, consider these research studies as positive both from the scientific and ethical point of view  .