Has the morning after pill mechanism only an anticonceptive effect

Why is the morning after pill mechanism often silenced?

Teenage pregnancy is a significant public health issue.(1) Worldwide, some 15 million pregnancies occur every year among young women aged 15 to 19,(2) approximately 1.25 million in the 28 OECD (Organization for Economic Co-operation and Development) nations,(3) and between 750.000 and 850.000 in the United States.(4)

As is well known, an estimated fifth of pregnancies World Wide ended in abortion. In Europe this proportion was nearer a third.(5)

Levonogestrel, the morning after pill mechanism

The oral preparation is marketed as two tablets containing 750 Ìg of levonorgestrel each or as one 1500 Ìg tablet. In either case, it is currently recommended to take 1500 Ìg as a single dose, as soon as possible after unprotected intercourse.(8) In order to make an ethical evaluation on the use of the morning-after pill, we believe that the main aspect to take into consideration is its mechanism of action since, depending on whether it is anovulatory or prevents implantation, the ethical judgement on its use will be different.

As regards the LNG method, its exact mode of action has not yet been elucidated.(9) Furthermore, there is very little literature on the mechanism of action of levonorgestrel at present, particularly prior to 2001. Thus, we considered it useful to refer to a 2002 review,(10) in which all articles published in English between 1966 and 2001 were evaluated. This concluded that “there is moderately strong evidence that levonorgestrel has a post-fertilisation effect”, i.e. it was accepted that in a certain number of cases, difficult to specify, but objective, the morning-after pill acts by a mechanism which prevents implantation and which is consequently abortive.

From 2001 onwards, although more information is available, it continues to be scant. In our opinion, only 5 studies related with the mechanism of action of the morning-after pill are of adequate technical quality.(11) On evaluating the first four (Fig. 1), it was found that the morning-after pill inhibits ovulation or prevents implantation,depending basically on the day of the menstrual cycle. However, in general, it was proven that when taken on days -1 to +2 of the menstrual cycle, considering ovulation as day 0, its action is predominantly post-fertilisation.

One of the authors who defends the anovulatory effect of the morning-after pill is Croxatto. However, when his most significant study(12) was evaluated in detail (Fig. 2), it was found that the anovulatory effect attributable to levonorgestrel varied between 32 and 46%, if to its specific action, we subtract the percentage of cases in the control group in which there was also anovulation. In other words, it appears that the post-fertilisation effect, even in this study by Croxatto, varies between 54 and 69%. Therefore, I do not believe that it can be excluded that the morning-after pill has an anti-implantation effect in probably more than 50% of cases.

The post fetilization effect of morning after pill mechanism of action

However, in order to be able to evaluate this data more critically, we found the paper by Mikolajczyk(13) particularly interesting. This study evaluated the efficacy of the pill due to the post-fertilisation effect, in function of the total efficacy achieved and the time between sexual intercourse and taking the drug.

To better evaluate this data, it is worth noting that the possibility of pregnancy after a single act of sexual intercourse, without considering the day of the menstrual cycle on which it took place, is approximately 8%.(14) Taking the morning-after pill causes this percentage to fall to 2%, Ho,(15) so it can be considered that the mean efficacy in preventing a pregnancy using the morning-after pill varies between 60-93%.

In addition to that previously considered and in favour of the levonorgestrel post-fertilization’s effect, Gemzell-Danielsson(17)suggested that the in vivo effect of LNG may be mediated through an increase in endometrial and serum concentrations of the potent gamete adhesion inhibitor glycodelin-A, which would be in line with the functional alterations of the endometrium reported in previous studies.(18)

As a result of the aforementioned studies, and in accordance with Tirelli,(19) who found that levonorgestrel taken in the late preovulatory phase, prior to the gonadotrophin surge, suppressed ovulation, while in contrast, ovulation was not blocked when LNG was given after the onset of the LH peak and had no effect on ovulation. So we suggest (Fig. 3) that if the morning-after pill is taken between days – 5 and -3 of the menstrual cycle, its effect could be anovulatory; if it is taken between days -3 and -1 it can arbitrarily have both effects, anovulatory and post-fertilization, and if it is taken between days -1 and +2, it would primarily prevent implantation.

Nevertheless, the assessment of the right time in which the LNG is administered and the forecast of its effect are difficult into practice.

Conclusion: The morning after pill mechanism have in many cases an abortive effect

This data allows us to conclude that, beyond ideological considerations, and from an essentially medical point of view, the morning-after pill, in a percentage of cases, which very likely exceeds 50%, acts by an antiimplantatory effect, and consequently abortive mechanism. 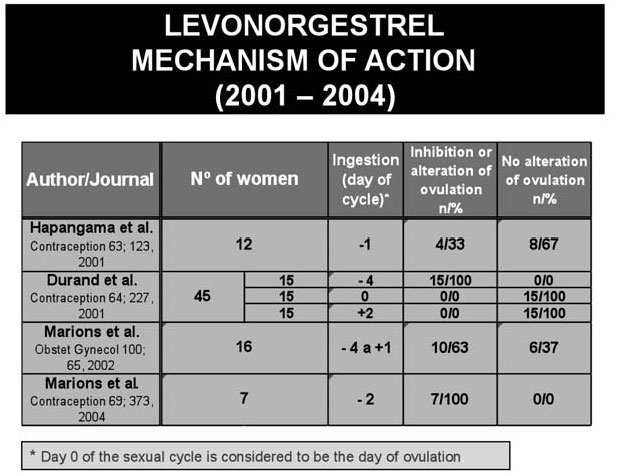 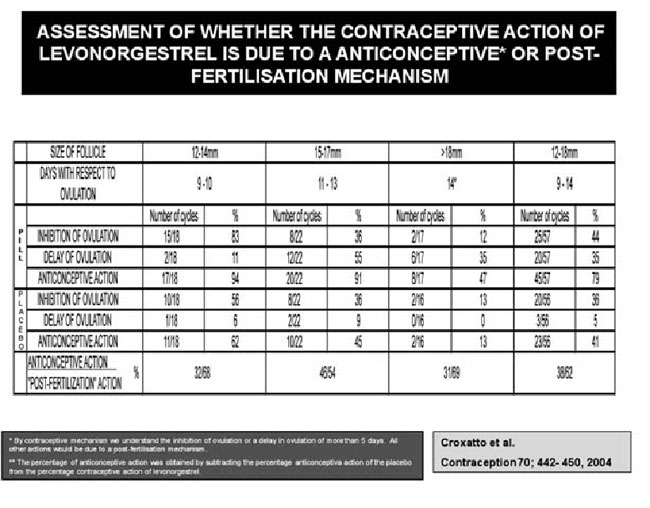 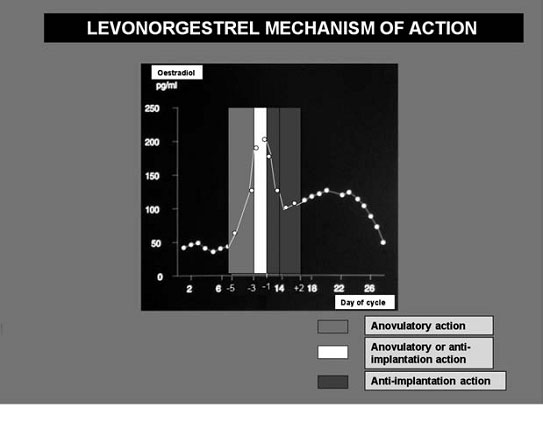 1.- REIME B, SCHUECHING BA, WENZLAFF P. Reproductive Outcomes in Adolescents Who had a Previous Birth or an Induced Abortion Compared to Adolescents’ First Pregnancies. BMC Pregnancy and Childbirth 2008; 8: 1-24.

14.- TASK FORCE ON POSTOVULATORY METHODS OF FERTILITY REGULATION. Randomised controlled trial of Levonorgestrel Versus the Yuzpe Regimen of Combined Oral Contraceptives for Emergency Contraception. The Lancet 1998; 352;
428-433.