In addition to the biomedical and bioethical problems raised by human-animal hybridization, there are also objective legal problems.

A recent article in the Journal of Medical Ethics (2014; 40, 284-285) reviewed this topic following a debate in the United Kingdom (UK) House of Lords in December 2012. The underlying problem is to determine whether hybrids containing human biological material, mainly DNA, should be considered partially human and if so, what their legal status should be.

The Human Fertilisation and Embryology Act 2008 (HFE Act 2008) regulates the legal aspects of human-animal hybrids. These hybrids refer to any embryo containing human nuclear or mitochondrial DNA as well as animal nuclear or mitochondrial DNA, but in which the animal DNA is not predominant. Other categories of hybrids can be legally regulated by the “Animal Act 1986”. 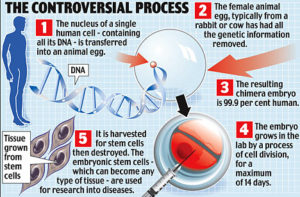 However, deciding which of the two categories into which hybrid embryos should fall is not that easy.

The English Health Minister, Lord Darzi of Denham, stated that hybrid embryos should be regulated by human statutes when they are considered to be “predominantly” human, which is not easy to determine. In fact, a chimeric embryo in which non-human cells were initially predominant could continue to develop into a hybrid in which human cells predominate.

Lord Darzi also stated that chimeric embryos that are “functionally” predominantly human should also be considered as human. However, the term “functionally human” is ambiguous, which complicates the issue of its legal status.

It was therefore concluded that the UK parliament needs to more definitively determine the legal status of embryos containing human and animal genetic material, following an extensive, in-depth debate that must take into account public opinion on this matter. In our opinion, though, this introduces an aspect that may make it difficult to a provide a balanced assessment of how the problem of human legal hybrids should be legally regulated.