The Swiss-based International Social Security Association estimates that every year, surrogate mothers give birth to around 20,000 children worldwide.Agencies and parents estimate that between 800 and 1,000 go on to live with Spanish parents, but there are no official figures. Figures for the number of children born through surrogacy arrangements and registered in Spain are not easy to determine.

Hundreds of Spaniards undertake similar trips every year. Surrogacy is not legal in Spain, so those who want to use a surrogate mother must go abroad. If everything goes well, they will work with agencies of varying trustworthiness. These, in exchange for money, will hire women who are willing to undergo hormonal treatment, carry another person’s baby to term and sign an 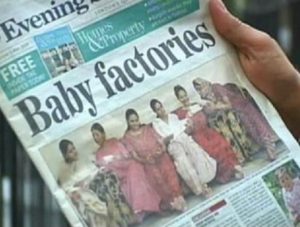 irrevocable and financially punishable contract to give it up after giving birth.

However, following a request by the Spanish Socialist party in September 2016, and which has already been answered, it has now been revealed that 979 children born through surrogacy were registered in Spain between 2010 and 2016, with children coming from 12 countries: Canada, United States, United Kingdom, India, Nepal, Mexico, Thailand, Ukraine, Russia, Greece, Portugal and South Africa (see further information HERE ).