Skip to content
Home/Bioethics, BIOETHICS NEWS, Ethics of Scientific Research, Gene Therapy, Genetics and Genomics, NEWS and VIEWS/Gene editing. The need for research with human embryos to treat diseases according to the new Nobel Prize winner

Gene editing. The need for research with human embryos to treat diseases according to the new Nobel Prize winner

We have published an article about The Second Summit of Gene Editing in November 2018 in Hong Kong where Jennifer Doudna said “CRISPR-Cas9 for human germline editing should not proceed at the present time” (read HERE). Now an interview published in Spanish newspaper El Mundo on 4 October, the brilliant new winner of the Nobel Prize in Chemistry, also discusses among other topics 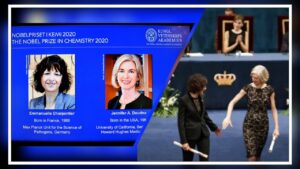 the possibility of using CRISPR, the technique she developed with Emmanuelle Charpentier to modify the DNA of any organism. Among the questions asked was whether she really considers that this technique could be applied in embryo research. In this respect, Doudna says, “I haven’t seen a convincing argument about the need for research with human embryos to treat diseases. At this point, there are limits in technology and our own understanding of genetics that suggest that it is too risky and difficult to apply in embryos. I think there are other interesting opportunities right now to treat people, as is already done in clinical trials for the treatment of cancer and sickle cell disease. That’s where the CRISPR opportunities are”. She was categorical in this controversial issue between researchers.

In the same vein, as reported in the aforementioned article, “a panel of experts led by the U.S. National Academy of Sciences and National Academy of Medicine and the U.K. Royal Society says it’s still soon to edit human embryos, because CRISPR also cuts where it shouldn’t, disrupts the DNA, or leaves cells unrepaired. The technique is not 100% accurate and can cause irreparable genetic defects. Scientists from several countries, including Charpentier, joint Nobel laureate with Doudna, have called for a five-year moratorium on the use of CRISPR in eggs, sperm, and embryos”. Read related topic HERE.

Apart from the use of this technique with embryos, CRISPR can be used for somatic cells, adult cells, as the modifications introduced in them, are not transmitted to offspring (including, for example, sickle cell disease), with very encouraging results. Read also the application of this technique with cell therapies.

Scientists are also trying to use CRISPR as a technique to diagnose Covid-19, which could facilitate its use and even reduce costs.