Increasing genome sequencing in different fields and its bioethical implications

Genome sequencing public domain, is the aim, blocking any attempt to privatize the genome

An interesting short review published recently in UK newspaper The Guardian discusses the use of genome sequencing and the bioethical challenge of putting every sequence found into the public domain.

Cheap and rapid systems for sequencing genomes, including the tiny genome of the virus that causes Covid-19, are now providing researchers, doctors and public authorities with critically important information about diseases.

In this respect, Dominic Kwiatkowski, director of the Centre for Genomics and Global Health at Oxford University said: “We are sequencing samples of Sars-Cov-2 from different sources to see if the virus is mutating significantly.” “The jury is still out on that. However, we are also using sequencing technology to highlight tiny variations in samples from different places, and that should help us pinpoint the locations of new outbreaks.”

The paper reports that “A very different use of sequencing technology is being pursued by Sarah Teichmann, leader of the Human Cell Atlas project. ‘Devices are now so sensitive that we can analyze DNA from a single cell (our emphasis) and at the same time compare our findings with human DNA from millions of other comparable cells,’ she said.

That data tells researchers what the cells in our bodies are doing at a very high resolution and at a specific time, information that has led to the discovery of many new types of cells, many in the immune system and others in the body’s various tissues” (our emphasis). 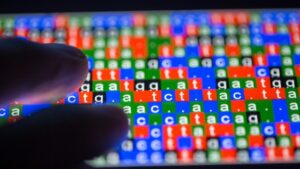 The article continues “This work has triggered a major revolution in understanding our bodies’ cells and their organization in tissue and organs,” said Teichmann, who is also based at the Wellcome Sanger Institute. ‘By comparing healthy tissue with diseased tissue in this way, we are getting incredible new insights into the mechanisms of those diseases. This is a very powerful technique.’ Such insights have included pinpointing cells involved in the development of cystic fibrosis, asthma and certain human tumors. The discoveries have opened up the prospect of developing therapies for these conditions.”

Genome sequencing public domain without exception. A fight to block the privatization of genome data

The review concluded, “The Human Genome Project is clearly having a big impact on medicine and research, but its progress was not without controversy during the course of its work, which began in 1990. ‘We were in a race. It was as simple as that,’ said Langford, who is now the Sanger’s director of science operation but who worked as a research assistant during the project’s early days. ‘We were out to stop people from putting patents on human DNA that was being sequenced elsewhere. […] We wanted to make sure everyone could use the data and were putting every sequence we found into the public domain to block any attempt to privatize the genome. And in the end, we succeeded.’” (The Guardian, Sun 21 Jun 2020).