Skip to content
Home/Bioethics, BIOETHICS NEWS, Genetics and Genomics, Medical Deontology, NEWS/Disparities in preterm prescriptions medication and treatments is an urgent issue to be resolved

Neonatal medicine faces a great challenge because of an important paradigm shift in the definition of extremely preterm infants. Although doctors previously thought that babies could not survive outside the womb until they were 28 weeks old, “[…] over the last nearly 40 years, that 28-week limit has steadily dropped, and now some babies delivered at 24, 23 or even 22 weeks (measured from their mothers’ last menstruation) are able to survive, even as they weigh 1.1 pounds (500 gr.) or less 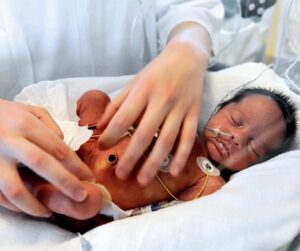 .” (Read related study HERE). This radical change in neonatal medicine demands specialized work on the part of health professionals and continuous updates to improve the current survival rates of extremely premature newborns. Obviously, this is not only a question of survival but also of avoiding possible negative collateral effects on the child’s health as much as possible (read our article on the matter HERE).

An article published recently in the prestigious journal The Lancet (September 26, 2020), entitled “Preterm health: time to bridge the evidence gap”, discusses the drugs that are being administrated in these patients.

Recently an article published in the prestigious journal The Lancet (September 26, 2020) entitled “Preterm health: time to bridge the evidence gap” treat the drugs that are being administrated in these patients.

We excerpt from the article what we think of major interest to provide these children with better quality health care.

The authors begin by recognizing the great advance of neonatal medicine and the issue they consider needs to be urgently resolved: “Despite the development of revolutionary life-sustaining advances in neonatal medicine, medications are frequently administered in an ad-hoc and suboptimal way.”

They continue, “Most drugs prescribed in neonatal care have not been submitted to the stringent regulatory processes of drug licensing that are standard in adult medicine. Although clinical research and licensing regulations differ between countries, the scarcity of licensed medications and the inevitable use of off-label drugs in neonates are universal problems (countries reporting these issues include the USA, Japan, China, the Netherlands, Australia, India, and Brazil).

Data extrapolation from adults, children and older infants to select the safest and effective medicine and dosing regimen

The current situation in the US and other countries

The article asks if the administration of these drugs to patients is based on strong evidence. “Despite more than two decades of implementation of legislative changes in the USA and a pediatric regulation in the EU since 2007, 65% of medications are prescribed to neonates outside the terms of their licenses —eg, the administration of fentanyl for pain relief. In the absence of strong evidence to support optimal drug choice, neonatologists are reliant on clinical experience, expert consensus, and data extrapolation from adults, children, and older infants to select the safest and effective dosing regimen” [emphasis added]. This practice results in considerable differences in neonatal prescribing both between and within countries for many commonly prescribed drugs such as antibiotics and anesthetic agents.” The authors concluded that “[g]iven the unique physiology of preterm infants, prescribing drugs when there is little knowledge of efficacy, safety, pharmacokinetics, and pharmacodynamics will continue to expose this vulnerable patient population to considerable risk.”

In this respect, we reiterate our previous bioethical statement in two articles on this issue, “The new possibilities for survival in extremely preterm infants—who are surviving in ever-increasing proportions, are more premature at birth and have fewer sequelae—make it necessary to review the protocols for medical care in babies born at 24 weeks of gestation or earlier, who are neglected today in many cases” (Read HERE and HERE).